When it comes to trap you either love it or you hate it.

Dedicated trap shooters – the folks who live and breathe the stuff – have it down to a science. Even more than skeet shooters, trap aficionados have been known to make the most minute tweaks to their guns between rounds because the targets didn’t break hard enough.

And the very same folks wouldn’t even consider shooting skeet, sporting clays or 5-stand – not wanting to taint the cosmic balance of their trapshooting consciousness.

So, what the heck is it about trap?

Unlike skeet, the trap shooter is essentially a lone wolf.

Whereas with skeet you can smoke and joke with your shooting pals as you congregate around each station, when you’re shooting trap it is only you at the station. The other shooters tend to become mere annoyances – hence the blinders worn by dyed-in-the-wool trap shooters on the stems of their shooting glasses. 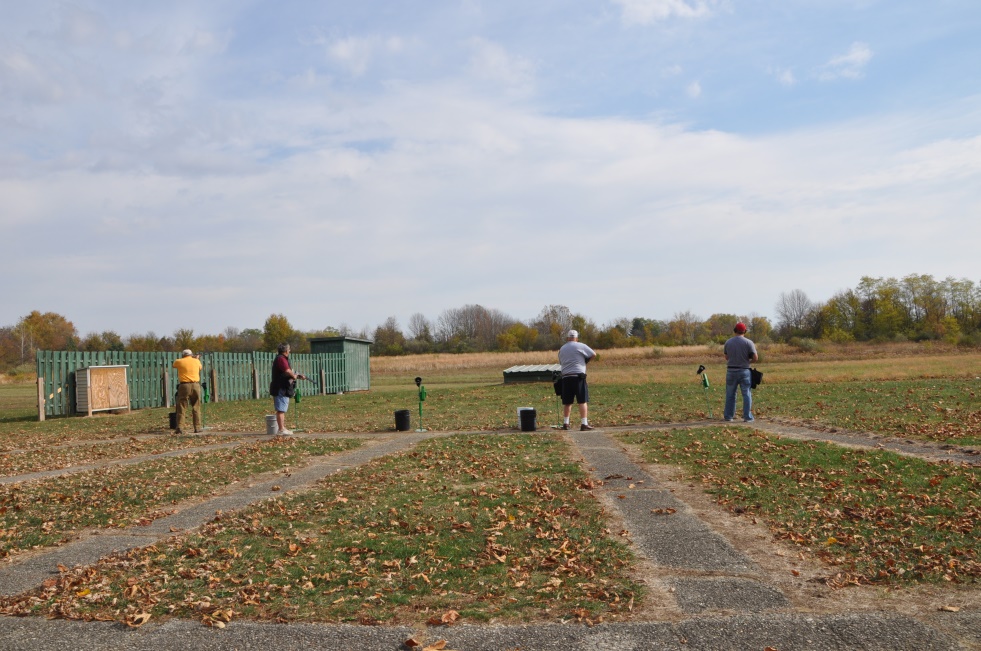 When you call “pull” in trap, it seems to resonate through the entire brain cavity of the trap shooter.

But it wasn’t always that way with trap. It was less clinical — a genuine blood sport.

Trapshooting can be traced back to England in the late 1700s. The earliest targets were live pigeons, released from cages called traps. In the1800s, trap shooting migrated from the auld sod to the new world – when live pigeon shoots were staged across our great land.

Trap historians will point to the year 1831 as the first American live-bird trap tournament at the Sportsmen’s Club of Cincinnati.

By 1866 trap shooters were trying to move away from birds to inanimate targets – perhaps as a means to standardize the sport. Man-made targets removed the vagaries of a thinking target – an important development in emphasizing the shooters’ skills. After all, if all the targets are the same, well there goes about 1,000 excuses as to why you missed it.

Over the next 15 years or so, target material evolved from glass to ceramics. In hindsight it would be easy to see that glass targets could never have the sailing dynamics of a clay saucer. But fortunately, the fathers of trap figured it out – or else we’d still be shooting at glass globes filled with feathers (really).

The trap house is 16 yards from the line of 5 stations.

Five targets are thrown at each of the five stations (using up the entire box of 25 shells). Each shooter takes one shot, then the next shooter on the right has their turn, etc. until a total of five are taken at each station. After each shooter has shot five rounds at a station, they move to the right – with the shooter at the last station (#5) walking to station #1 at the end of the round.

Standard trap is probably the only shotgun sport that uses a single-barrel configuration (since you’re only permitted one shot per target). There are exceptions, which you’ll see in a moment. Trap guns have high ribs designed to smash rising targets.

To make the game tougher, you can move further back from the 16-yard line in a game called handicap trap. By its definition, handicap trap positions you 19 to 27 yards from the trap house. It’s the same 5-station rotation only further back.

Now it’s time to get out your O/U trap gun. 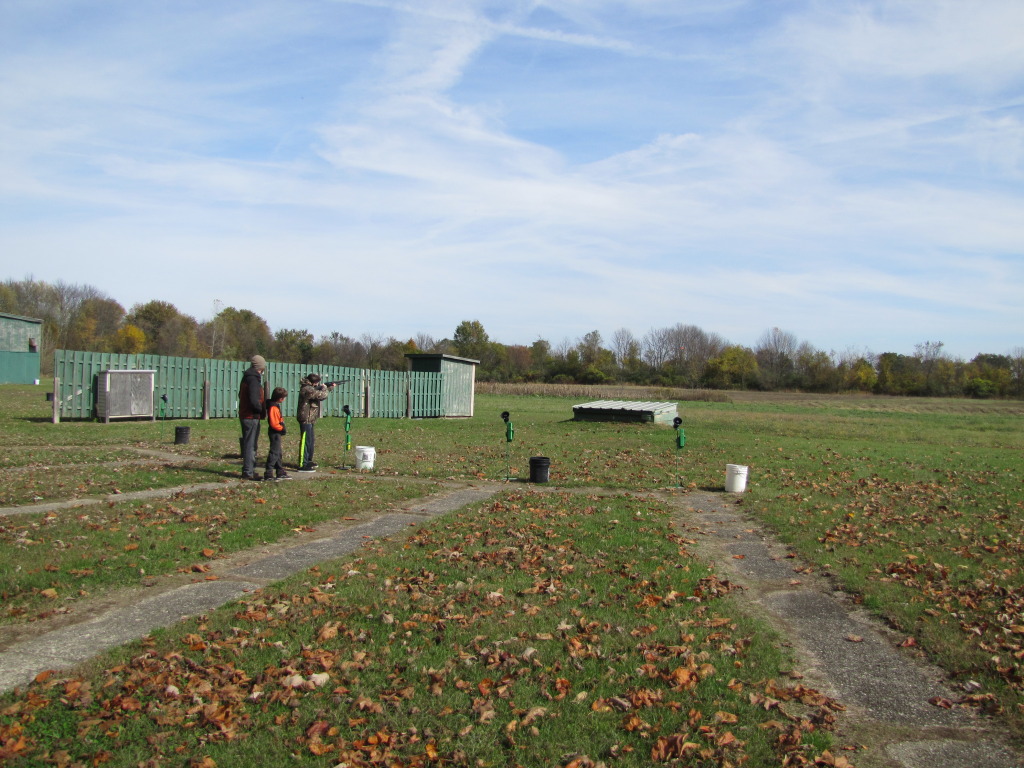 We start getting into two-shot trap with Double Trap. That’s where you stand at the 16-yard line. Two targets are thrown simultaneously along set paths of about 35 degrees left and right and you have to nail them both.

Wobble Trap is also a two-shot game. In Wobble, the targets are thrown at extreme angles – screaming to the right and left and launching skyward at a jet-fighter trajectory. They also oscillate or wobble.

But that’s child’s play compared to Olympic Bunker Trap. According to the rules set by the International Shooting Sport Federation (ISSF), you get to shoot a bird launched from the trap house at 76 mph using a 7/8-ounce load – which is anywhere from 1/8 to ¼ of an ounce lighter than the load used in other trap games.

Let’s see…fast, strong targets using a small load. Why not add another person to the squad and spread the pain?

Instead of five stations, Olympic Bunker Trap features a squad of six shooters who must adhere to strict guidelines about moving between stations.

One Tie / All Tie – If any two shooters tie with the high score…all shooters tie, regardless of score, and have to give $ into the pot to buy back in. Shoot until one shooter breaks the high score by her/himself, or high scores decide to split. If you have 20 shooters on the line with a $2.00 buy back, you can see the pot gets big quickly without any individual spending alot to participate. One ties should be shot from past the 27 after a few “ties” or it will get boring. Start anywhere and work your way back.

Dove Target Game – All birds coming from one trap and setting 8-10 shooters around the one trap (using adjacent trap positions, in a follow the leader format. Hit & Move, or 3 Misses & Move, with one box of shells. Whoever goes the farthest. Out, back and out wins bragging rights for the night or you can play for a pot. Some shots are 60-70 yards!

Handicap doubles – Shoot 2 yards closer than your yardage. AA 27 AA shoot from 27. New shooters or non ATA registered shooters shoot from 20 yds or ” known ability ” applies. This is a riot. You can also play this with a backup shooter and knock out people as you go.

Oscillating Doubles – Have a pat trap, set it up to throw doubles and then turn on the oscillation.

Straight Race – 5 targets each individual, top scores shoot off for first, second high shoot off for second. Two man protection=3 targets each, same shoot off. Three man protection=3 targets each, same shoot off. The unidentified one you mention is a “Piece Shoot”. One tie, all tie=leader shoots 3 from a position he chooses and each in turn do the same. If any two shooters tie, all are tied and shooting resumes with each adding money to the pot and the second shooter in line leading with the previous leader last.

Slider / Adjustable Yardage – You start out on the 20 yard line and that’s as close to the trap as you can get. Then, it’s kind of like normal trap, only when you break a bird, you move back one yard. But if you miss a bird, you move forward 2 yards (no further than the 20 though). The object is to basically get all the way back to the 27, and stay there for the entire time. For safety, if we start getting more than 2 yards apart, the closer people have to walk back and forth.

Annie Oakley (with one box of shells) – When you get “knocked” you go to the end of the line. remember that you still have to shoot even when at the end of the line. The guy with shells left over at the end wins. Usually the guy at the head of the pack. Set the trap height all the way up and the spring on kill and wide angles. Start at the 19 shoot one target move back 2 yards. When you get to the 27 change stations and shoot and move up 2 yards and follow that. Make the guys shoot handicap and make them swap guns to start. You have to be really careful about this one with someone shooting someone else’s gun.